Get to know our Team

We have been here for your friends and families for more than 65 years.

New memories are created every day! We want to host your next celebration and event.  Our team is personable and strives every day to provide the best customer service. We want you to bring the party, while we supply the rest.

In 1954, a customer approached Joe Caparosa, Sr., founder of Family Bowlaway, “Can you teach my son to bowl?”

Family Bowlaway’s history and involvement in the community began when Joe Caparosa, Sr., bought Penn Lanes, a 10-lane bowling alley that employed “pin boys” who reset every pin by hand. At that time, it was a small second-story bowling alley across from Penn Theater, a cinema on Main Street, Butler, Pennsylvania. 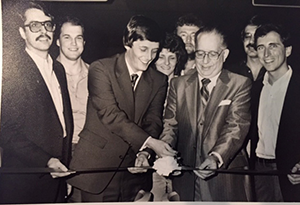 on the move again!

In 1963, Joe Caparosa, Sr., added a second location up the hill from the original Bowlaway Lanes, called Bowlaway Annex. This addition included 12 lanes, a pool table, and new state-of-the-art bowling machines. A few years later after obtaining a liquor license, a small bar and restaurant were added: the original 11th Frame. More lanes were added in 1970. In 1973, there was a fire that badly damaged the building.

At that time, the decision was made to rebuild the bar, but the bowling center was eliminated. Out of the tragedy, the 11th Frame took over the space that the lanes had occupied and was transformed from a simple bar to a large facility that could handle close to 1,000 people. It was a great spot for nightlife and became increasingly popular with a wide variety of well-known bands who performed there.

The 11th Frame was destroyed by a second fire in 1975. The facility was rebuilt and resold several years later to a local couple that renamed it “Tanglewood” and operated it as a banquet facility. Years later, it was resold to a senior citizen group.

Then in 1978, Joe Caparosa, Jr., joined his father to help run Bowlaway Lanes for about five years. In 1983, they purchased Family Lanes and moved their equipment from Hansen Avenue to Route 8. A year later, Kevin Caparosa, son of Joe Caparosa, Sr., joined the family business.

In 1992, the Caparosa brothers built the final location of Family Bowlaway on Fairground Hill Road in Butler, PA. With an acquired liquor license and the new bar in place, the Spare Time Lounge had come to life.

About five years later, the laser tag arena and various other party rooms were added to the center. With the addition of the various entertainment venues, it was decided that Family Bowlaway would now be called Family Bowlaway Fun Center.

Unfortunately, in 2012, Joe Caparosa, Sr., passed away. With his passing, Joe, Jr., and Kevin decided it was time to rebuild and renovate the Spare Time Lounge in their father’s honor. The bar was renamed the 11th Frame Bar and Grille and underwent open construction for about five months. During the renovation, the Caparosa brothers proudly kept their Butler roots by strictly using local contractors throughout the process.

The Caparosa brothers take great pride in their establishments. Family Bowlaway Fun Center and 11th Frame Bar and Grille offer first-class customer service in a modern family-friendly atmosphere where memories are created “by our family, for your family.”

In 2018, twelve bowling lanes were removed and Family Bowlaway became a twenty-eight lane center. In July of 2019 (as imaged above) The BackAlley hosted its grand opening. This unique space was constructed using many materials from the bowling lanes and local businesses in Butler, PA. The construction of the industrial space included many butler county businesses. In addition to the businesses that created this space, many businesses celebrate their employees with this space as well. Providing a modern and interactive space many family celebrations, corporate parties, and weddings reserve The BackALley. Creating this space is a tribute to the Caparosa family history, catering, and events in previous locations.

As a friendly face, with a dry sense of humor that our customers have spent more than 20 years getting to know, many customers consider Andy an extension of their family. He can quickly recall many life milestones of our customers and their children in our community. As the face of our company, he continues to lead and support our staff through the various evolution of our businesses. With over 35 years of managerial experience around the country (not all in bowling) and a degree in Business Management, Andy brings a plethora of knowledge to our company. His favorite pastimes include family time at the beach, trips to Canada with his wife, spending time with his daughter, and exploring new areas of the USA and Canada while attending concerts with his son (Pearl Jam 22 times!).

After joining the Butler High School Bowling Team and Youth League, Brittney built relationships with our staff and later joined our team. She excels with our customers and has grown from working in laser tag to Assistant Manager. In addition to these duties, her passion for graphic designs expands our marketing and center visuals. Make sure to check out our logos, as they were created by Brittney too! When she is off the clock, she can be found enjoying her hammock, hula hooping, or taking lots of family photos.

Scott brings more than 20 years of experience with him. He is looking forward to playing a lead role in the many catering and events hosted in our center every year. Many of our customers also know him from the years he spent working as a bartender at the 11th Frame. While he is often seen wearing a hat, we never would’ve guessed Scott has more than 150 Major League Baseball hats.

Since joining our team Hanna has taken on lots of responsibility with our events, marketing, forecasting, and strengthening relationships with our customers. She continues to build relationships with our bowlers as a way to learn about the sport of bowling. Her organization and thoughtfulness drive us forward as she looks to create the best experience for customers while they’re here by assisting from the ground up on planning our days in the center. Hanna’s favorite princess is Cinderella, even her dog’s name is (Gus) Gus.

Adding a plethora of knowledge to our team, Kristen paves the way for our future in the wedding industry. From tours to the big day, Kristen will be there every step of the way ensuring the coordination of a bride and groom’s big day runs flawlessly in The BackAlley.  Kristen is one of four managers that absolutely loves Halloween! One of our very first introductions occurred when Kristen and her husband were judges for our annual Halloween Party Costume Contest.

Linda has stepped up and redefined our bar service, adding seasonal specials to the menu many customers have enjoyed something new! As bowling season returns she continues to establish new relationships with our league bowlers. Like many others, Linda enjoys family weekends at camp relaxing and enjoying quality time.